The History of the Silversmiths' Guild of Canterbury

The seed was sown for the formation of the Guild in Christchurch as a result of a workshop run by an Australian silversmith in January 1982. The attendees were clearly bitten by the jewellery-making bug, and realizing the advantage of sharing ideas and techniques decided to meet on a regular basis in each other's homes.

These early members drafted a constitution and elected a Chairman, Dr Larry Field of the Zoology Department of the University of Canterbury, who applied to the Crafts Council of New Zealand for the Guild to become recognized.

The Silversmiths’ Guild of Canterbury was officially formed in October 1982. The Crafts Council of New Zealand were very encouraging, stating that there were no other silversmiths' organisations in New Zealand, and the Guild was therefore breaking new ground! This is still the case today. 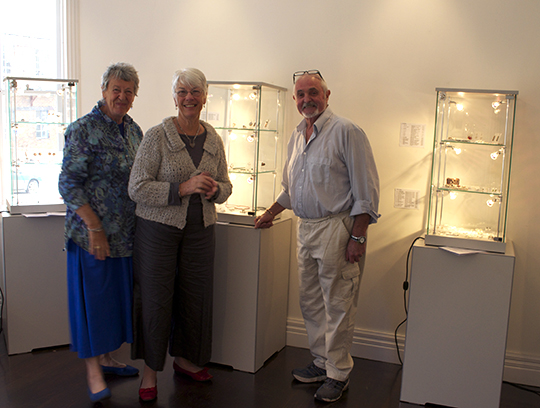 The very first exhibition of the Guild's work was held in 1983 and was curated in partnership with the Woodworkers Guild. Members consisted of equal numbers of men and women.

As member numbers grew, applications to fund workshops and attract visiting tutors were made to the QEII Arts Council. A successful funding application welcomed a prominent Dutch silversmith Lysbeth Teding van Berkhout, who hosted a three day workshop and lecture.

Further funding applications brought more experts to Christchurch, with workshops by Herman Junger (Goldsmith), and jeweller Aya Nakayama (part of the NZ/Japan Exchange Programme organised by the Crafts Council). Nakayama offered a 2 day workshop with Auckland jewellers, a conference and 5 day workshop in Christchurch, and a 1 day informal seminar in Wellington.

Christchurch Polytechnic Gets On Board

As a result of these workshops, Christchurch Polytechnic considered establishing a fully equipped jewellery workshop in consultation with the Guild, allowing them a space for regular workshops. The Polytechnic also considered jewellery as a vocational training course within their curriculum.

Today, jewellery design forms a strand of the Visual Arts BA degree course at Christchurch Polytechnic. Workshops continued regularly, hosting native jewellers Anthony Williams, Jenny Pattrick and enamellist Bill Bestic. These special workshops made use of facilities at Mairehau High School and Christchurch Polytechnic. Then in October 1985 a room was rented in The Arts Centre and the Guild remained there until 2011. 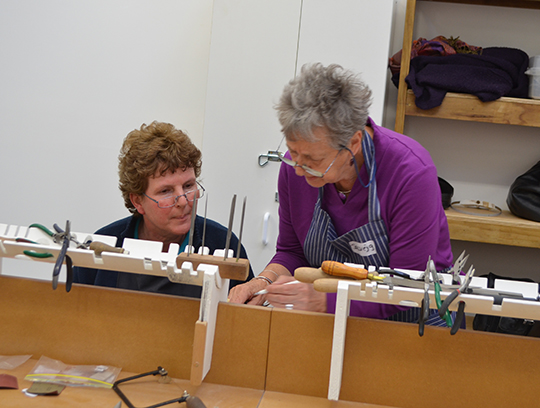 From that small beginning a number of members have contributed in many ways to make the Guild the well-established organisation it is today. Its success has been largely due to the tuition programme run by the Guild. Not only have these classes been the main source of new members, they have also provided the funding necessary to maintain the fully equipped workshop.

Currently two classes - Level 1 and Level 2 - are run each term with the tutors being drawn from the Guild. The Guild also runs a monthly workshop programme featuring a different technique each month to give members the opportunity to try something new and develop their skills.

In 2012 the Guild received an Earthquake Emergency Assistance Grant from Creative New Zealand. This show of support of jewellery as an important art form gifted the Guild with the funds it needed to help re-fit the new workshop at the Tannery development in Woolston.

As the only Guild of Silversmiths operating in New Zealand, the teaching environment offered to our students is unique. On completion of Level 1 and Level 2 courses, students are invited to join as member. Unlike medieval times, Guild members no longer have to produce a masterpiece in order to be accepted! However, competency in the handling of tools and techniques has to be demonstrated, and in return for an annual subscription members have the opportunity to use the workshop on a pay-as-you-go basis, and can purchase materials, share ideas, and use the facilities to test out ideas.

The Legacy of an Art Form

In June 2015, Creative New Zealand have again shown their support of jewellery as an art form by awarding a Craft/Object Fellowship to Canterbury artist/jeweller Dr Areta Wilkinson (Ngai Tahu). This award shows that jewellery making is an important artistic medium in the national consciousness.

Welcome, Come And Create With Us

The Silversmiths’ Guild of Canterbury’s member numbers continue to grow in the ever-evolving city of Christchurch. If you want to learn more, come and join one of our classes at the Silversmiths Guild.